Last year the dwarf plum tree in front of the spruce was covered with blossoms, like snow.  That was a record year.  Branches broke under the weight of the plums.  We had enough plums to share and freeze and cook with.  This year is better than most.  Buy, it is not any where near last year's blossoms.

The two dwarf pear trees are doing well.  Both blossomed this year.  This was completely unexpected because they were planted in 2013.

The cotton wood tree is gone.  It will be missed.  It was planted ~ 5 years in anticipation of removing the cottonwood tree that was here when we bought the house. It is nice to have a large tree on the West side of the house in the Summer.  Unfortunately, the squirrels figured out how easy it was to strip the bark and once they started this habit they saw no reason to stop.  The construction barrels are a story relayed below this view of verdant loveliness.

Last year's photo from this view was taken the first week of May.  This photo was taken May 17th.  It was a long cold Winter and late Spring. 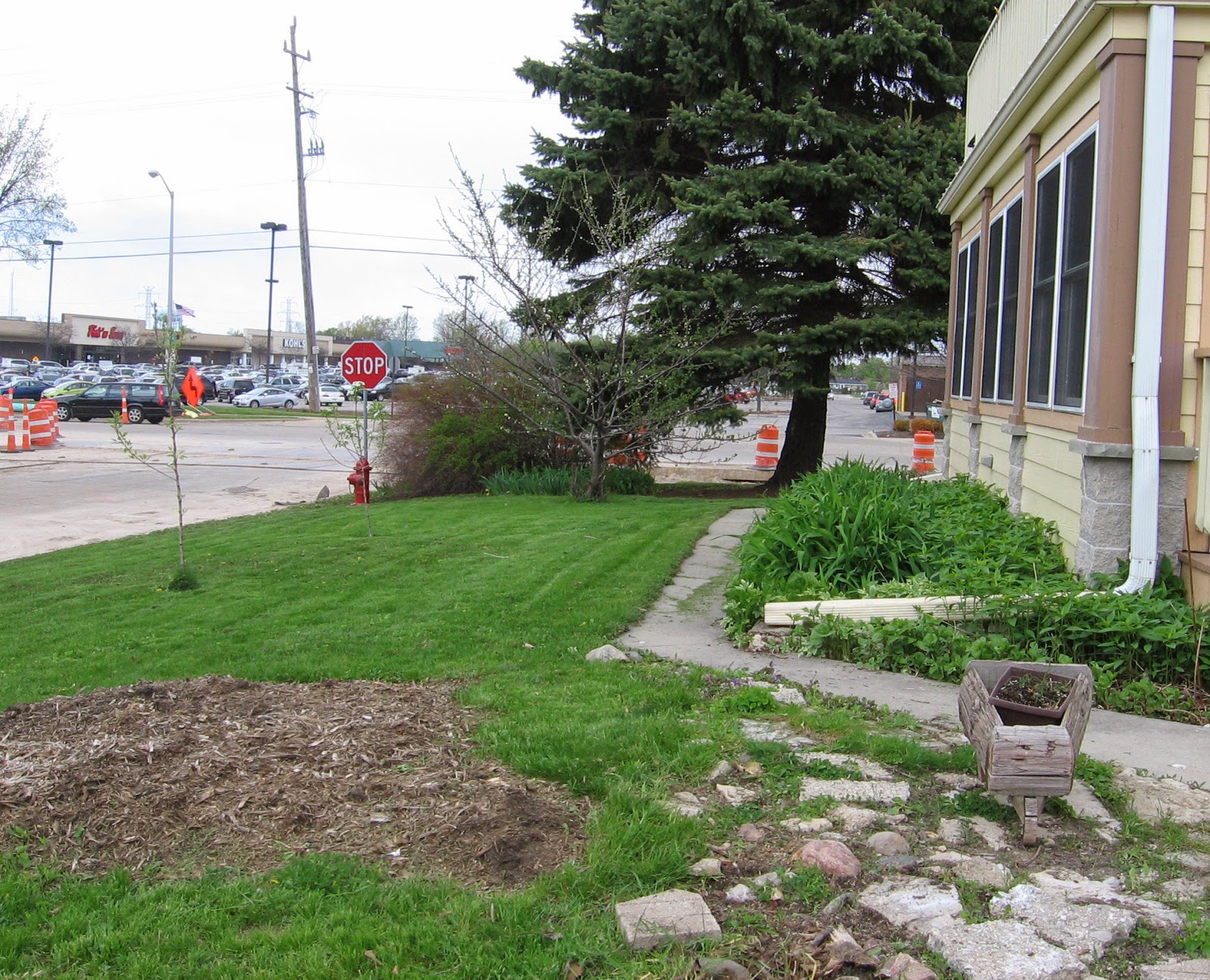 WE energies has been working on a gas line replacement project since ..... ... .. it seems forever.   The part that concerns us is the portion that ran from 84th street and 124th street along Cleveland Avenue.  Last Summer they closed down the street over the freeway while the bridge was rebuilt.

The Arthur / Lincoln project met in the center the first week of May.  The location is in front of our mid-century frame house.  What is shown below is after spending a weekend of drop, screech, drag, shake, beep - beep - beep. that went on all night.  There was no construction during the day.

I began taking photos on the 11th of May.  The last photos from this posting were taken on the 14th or 15th with the exception of the photo above. They are in chronological order.  The only modifying I've done was to crop or lighten the original photo.

An email was sent off to my alderwoman pointing out the noise and shaking of my house late at night.  Her response was not helpful.

Hello Nannette: I feel so badly for you people---I know by now how frustrated you must be ---all I can say is, be patient just a little while longer as the end of the project where you are is in sight! This is a WE Energies project and complaints should be directed to them at the number designated in the letter they reportedly sent to all the properties on Cleveland.

It came to a 'I can't take it any more' moment when pot lids fell to my kitchen floor after 10:00 at night.  My house was being shaken by the jarring of the jack hammer shown below. There are now new cracks in my plaster ceilings.

I got out of bed and called the contact phone number provided by WE energies to use should we have any questions. John Feider.  (414-944-5787)  It went to voice mail.  Isn't this a customer friendly outreach?

John Feider returned the call the next morning.  John informed me he had called our phone (wall phone no longer in service) with no answer and knocked on our door to contact us about the project.  3rd shift worker sleeping.  1st shift workers at work.  Trying does not count when the result is sleep deprivation.

By this time a noun-verb-noun sentence was a struggle.  We were offered a hotel for the balance of the work being done in front of the house.

Think this through.  We both work early first shifts and we were offered a wonderful opportunity to sleep somewhere with a strange bed, thin walls, people who do not work early first shift coming and going, wake up services that may or may not remember to call, along with the logistics of transporting clothes and meals for the next 20 hours. Since when did I volunteer for any of this as an option.  Add to that the recent WE energies bill that offered assistance paying the high bills caused by the extreme cold of last Winter.  Here's a clue.  We replaced our furnace Thanksgiving weekend.  Our high bills were not caused by additional use.  They were caused by a hike in the natural gas rate.  THE SAME PEOPLE WHO ARE INTERRUPTING MY SLEEP PATTERNS!!! 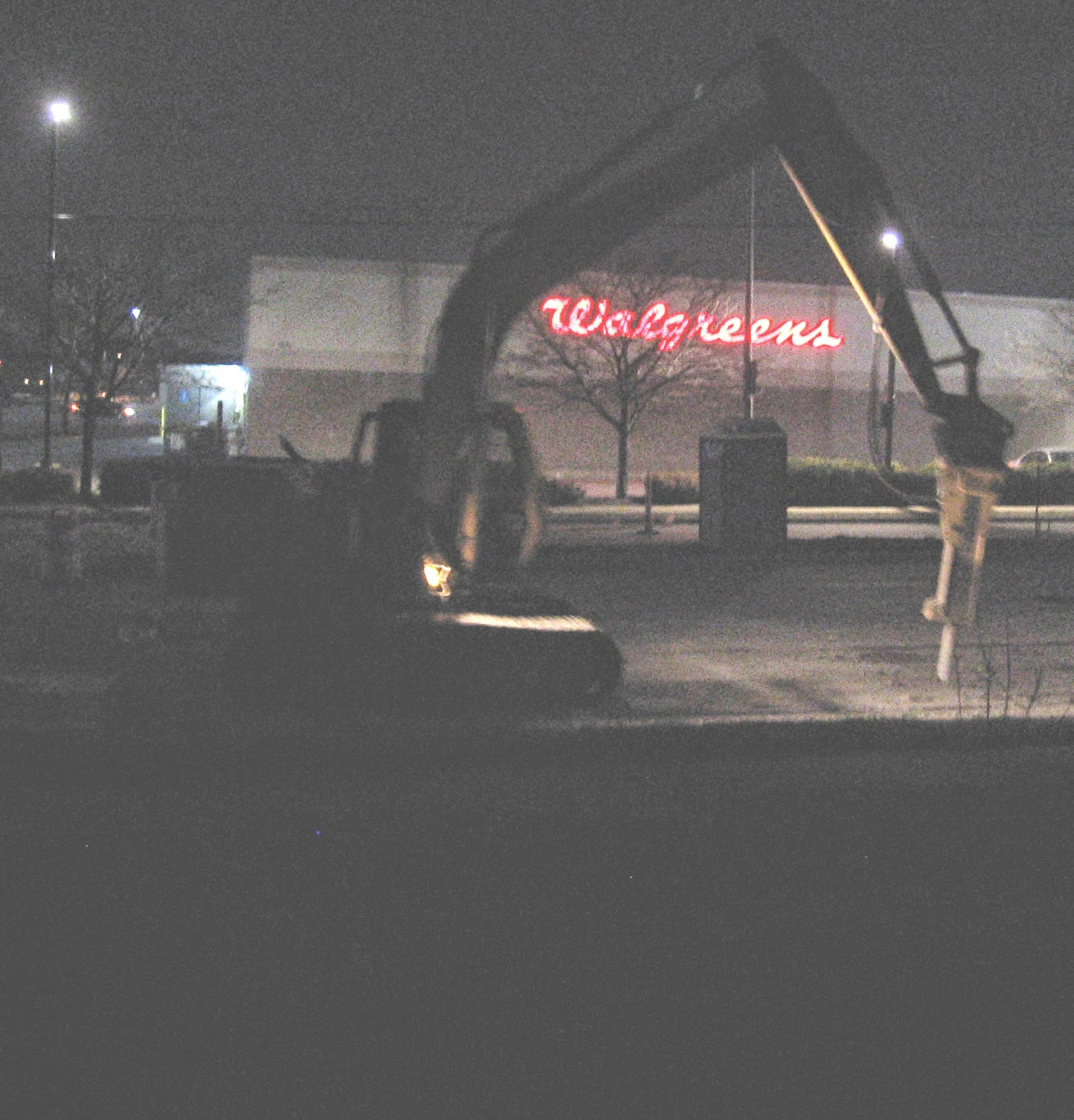 Back to my conversation with John Feder.  The reason his crew is working nights was because the Wisconsin DOT wants to maintain traffic flow as much as possible on highway 100 located 1 block to the east of our house.

I found the person in charge of the DOT South East Wisconsin road projects and fired off two emails along with photos. Neither email has been responded to.  michael.pyritz@dot.wi.gov  Wouldn't it be nice if we all had jobs where we could ignore and  patronize people we are inconveniencing? 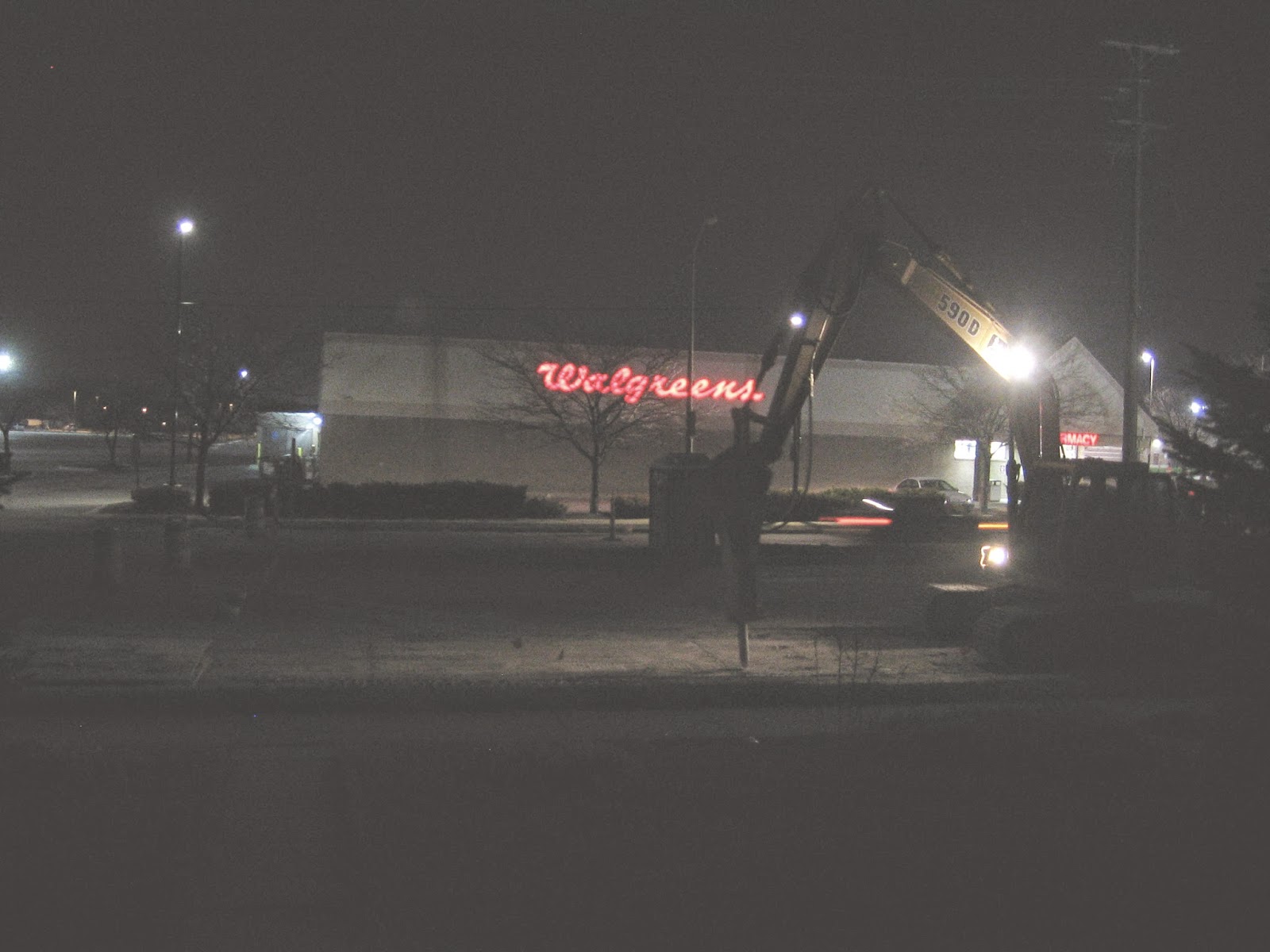 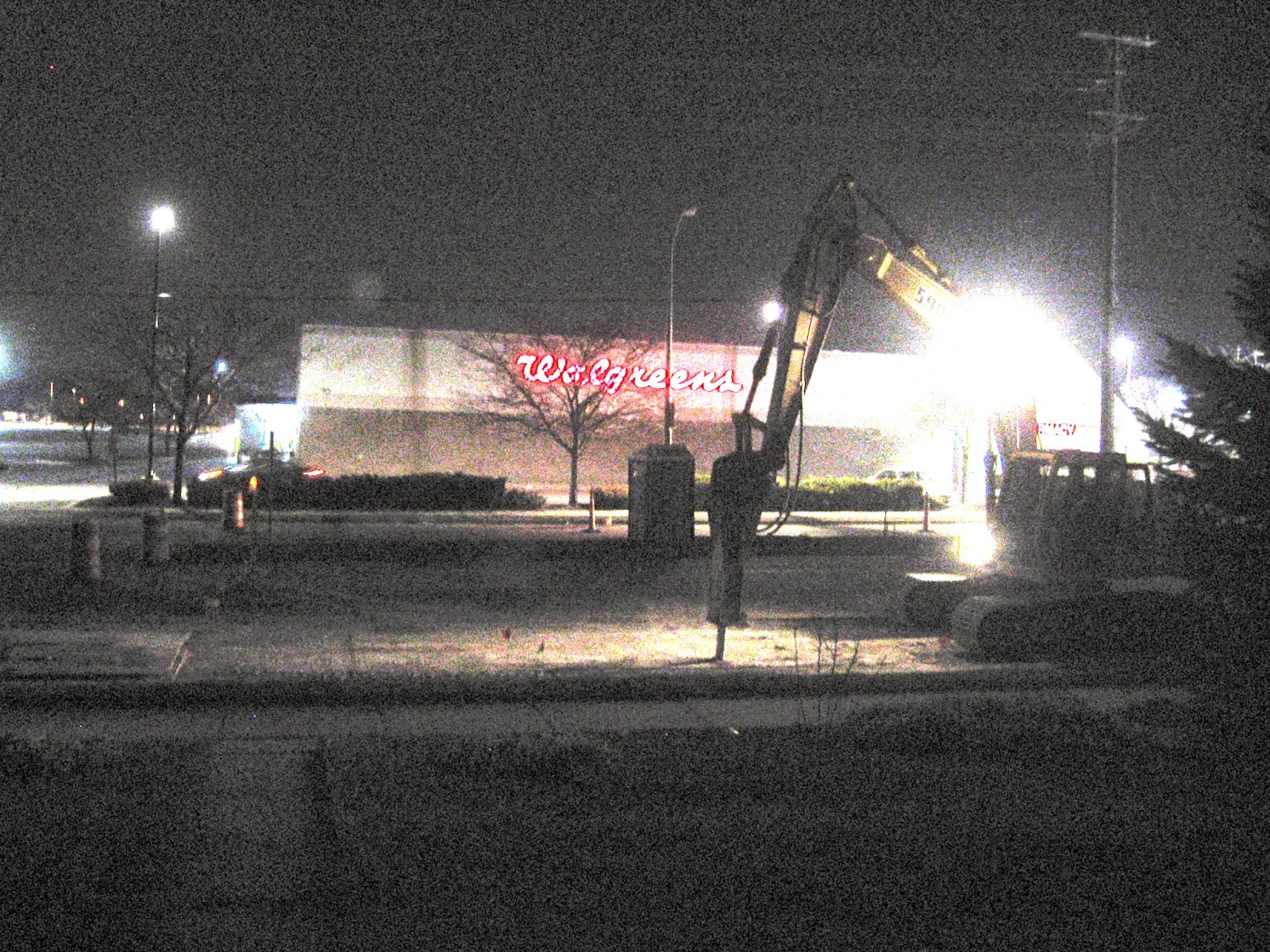 There is a robin to the right of the day lilies doing his thing. 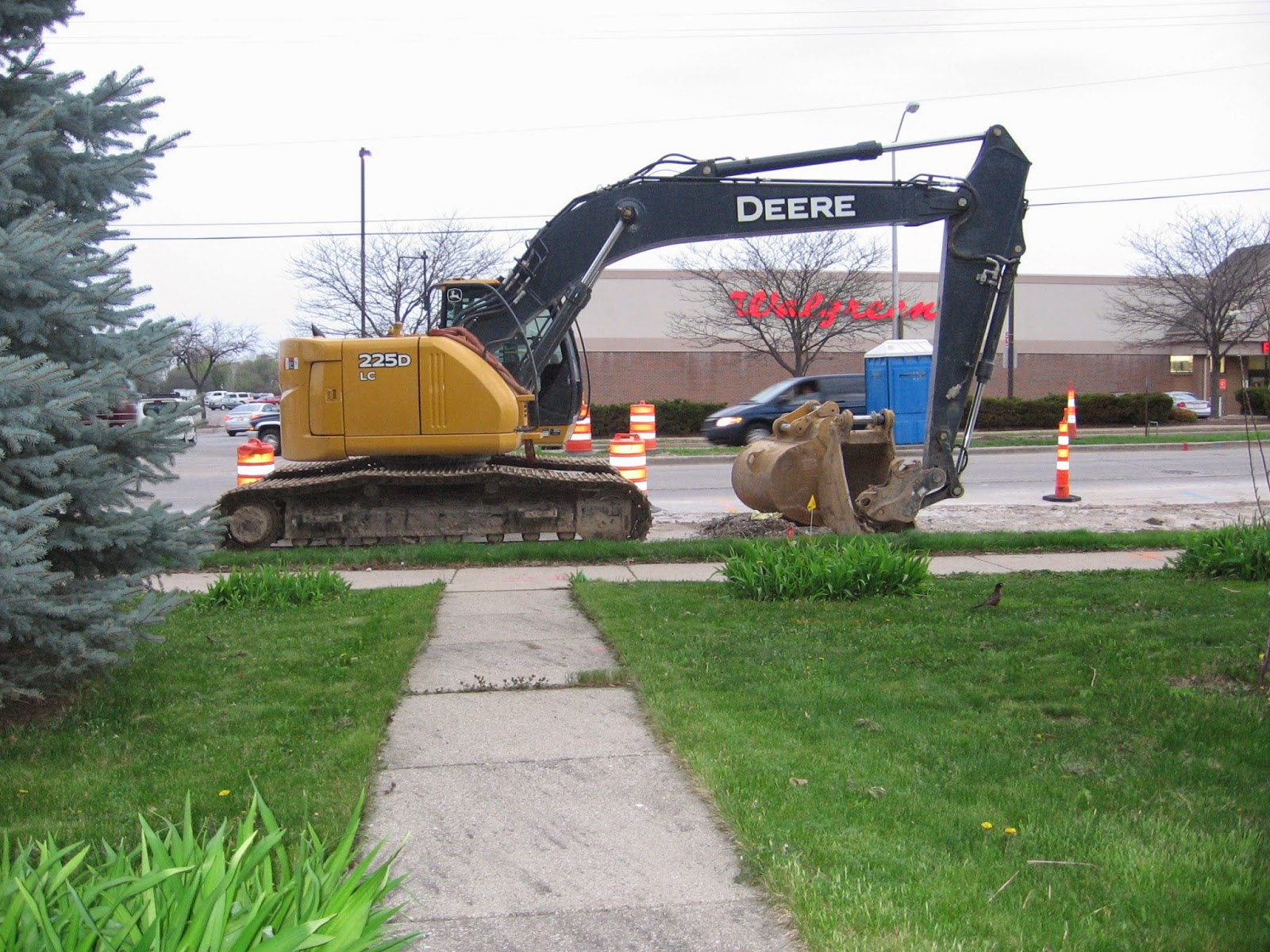 The plum tree planted last Spring located it the middle of this photo survived the Winter and is already providing the cross pollination to the other tree with it's tiny blooms. 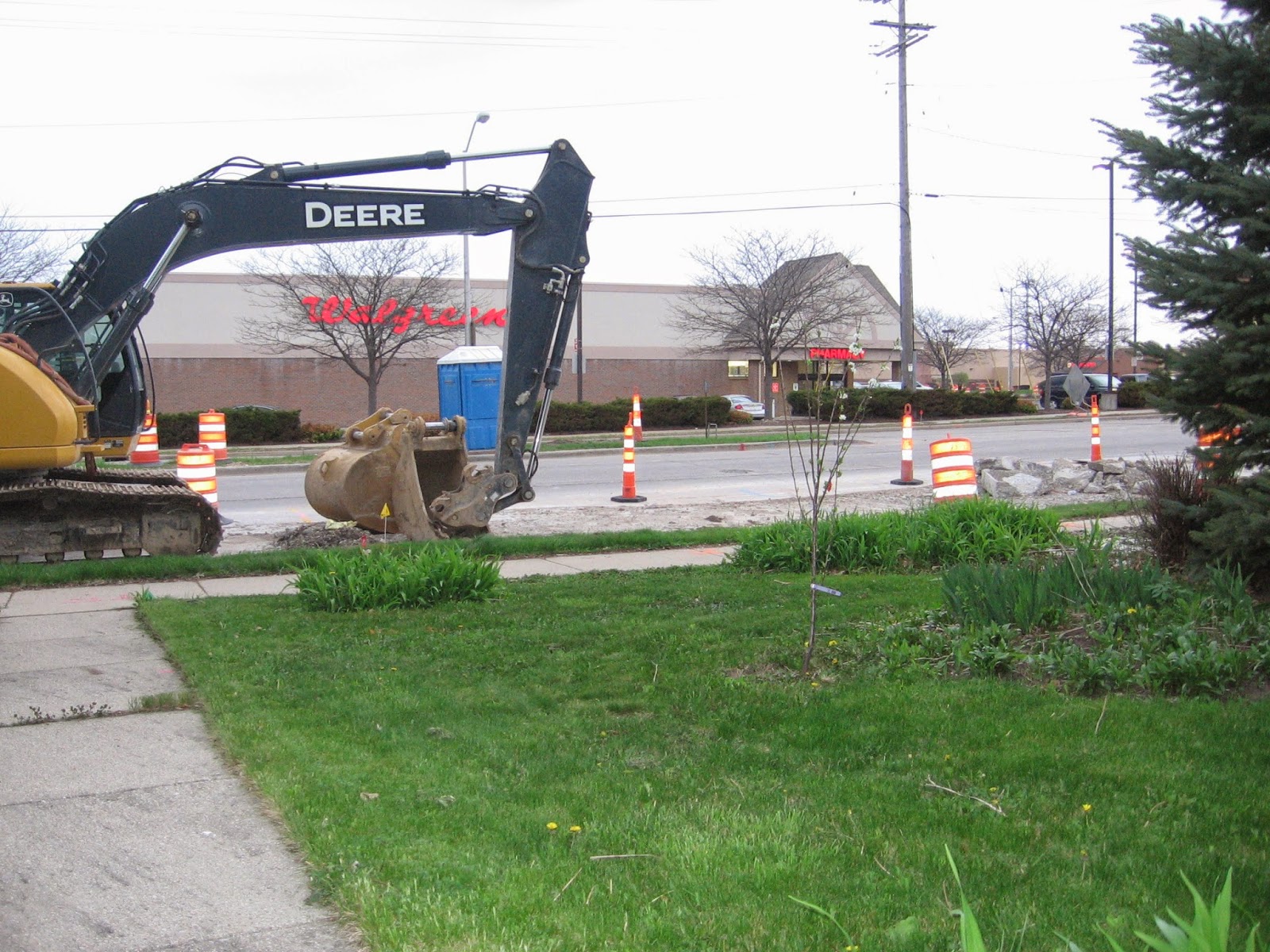 Our house is on a corner with an open 2nd story porch that provided the elevated views of the gas line project.  The views above were looking to the North onto Cleveland Avenue.

The photo immediately below is of 109th street.  This is a residential street that was posted 'No Construction Vehicles' ...... It's printed on the other side of the sign to the right of the skid steer parked on 109th street. 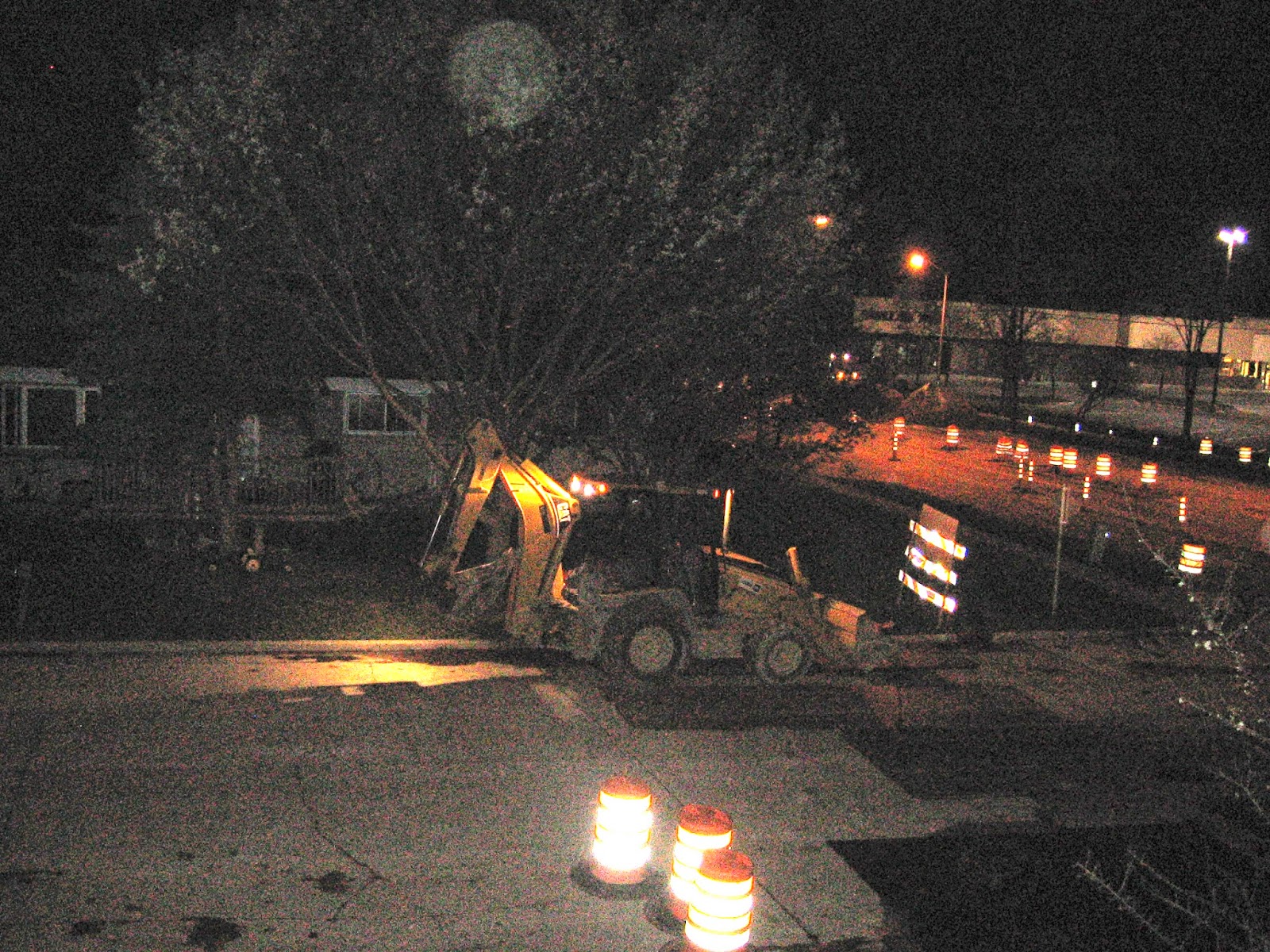 Once the jack hammer was parked, anything seemed livable.  The photos below show the ballet of the digging CAT shovel removing the broken street and placing it into dump trucks that were lined up in the P&S parking lot like chorus girls waiting to go on stage. 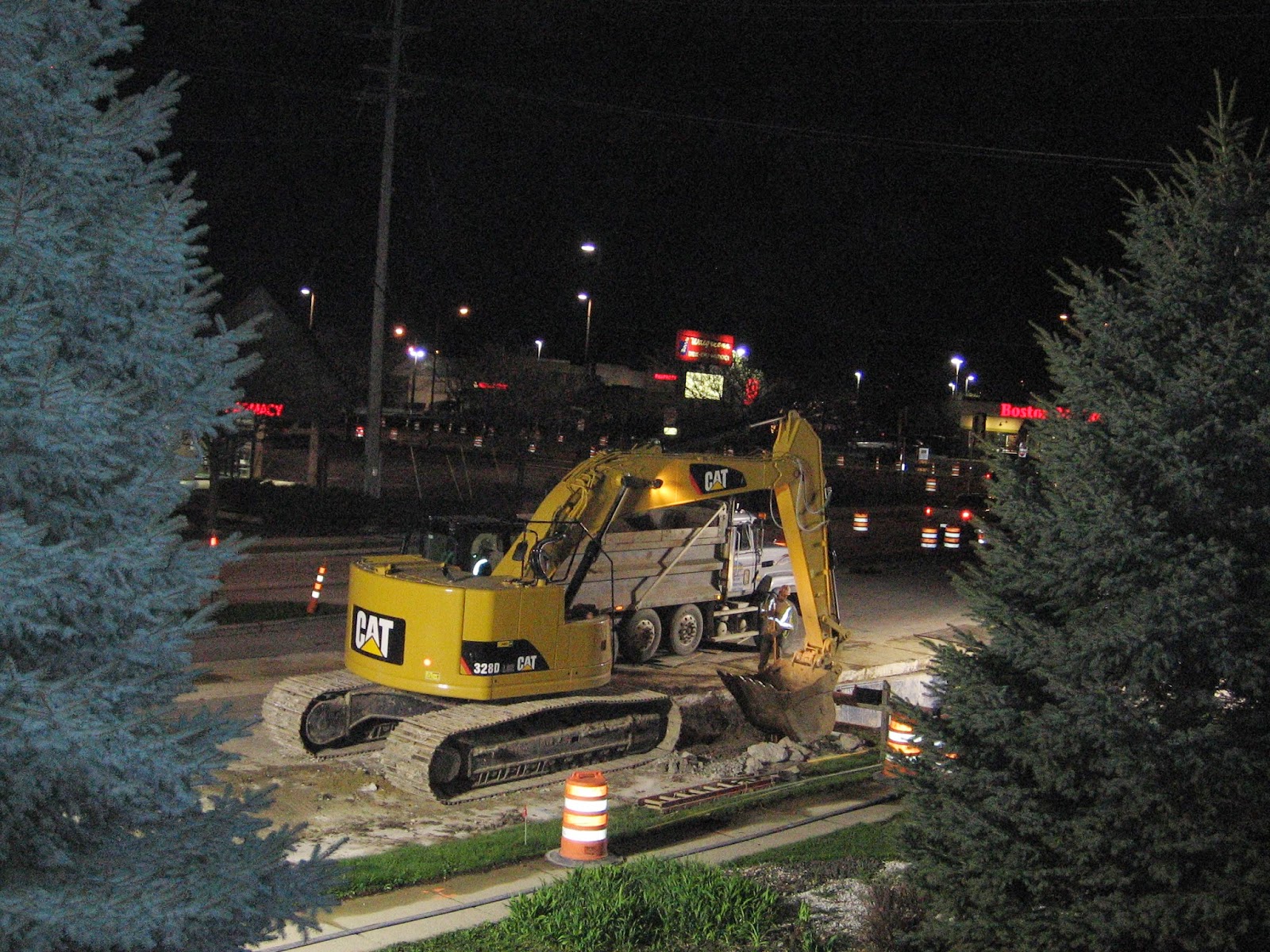 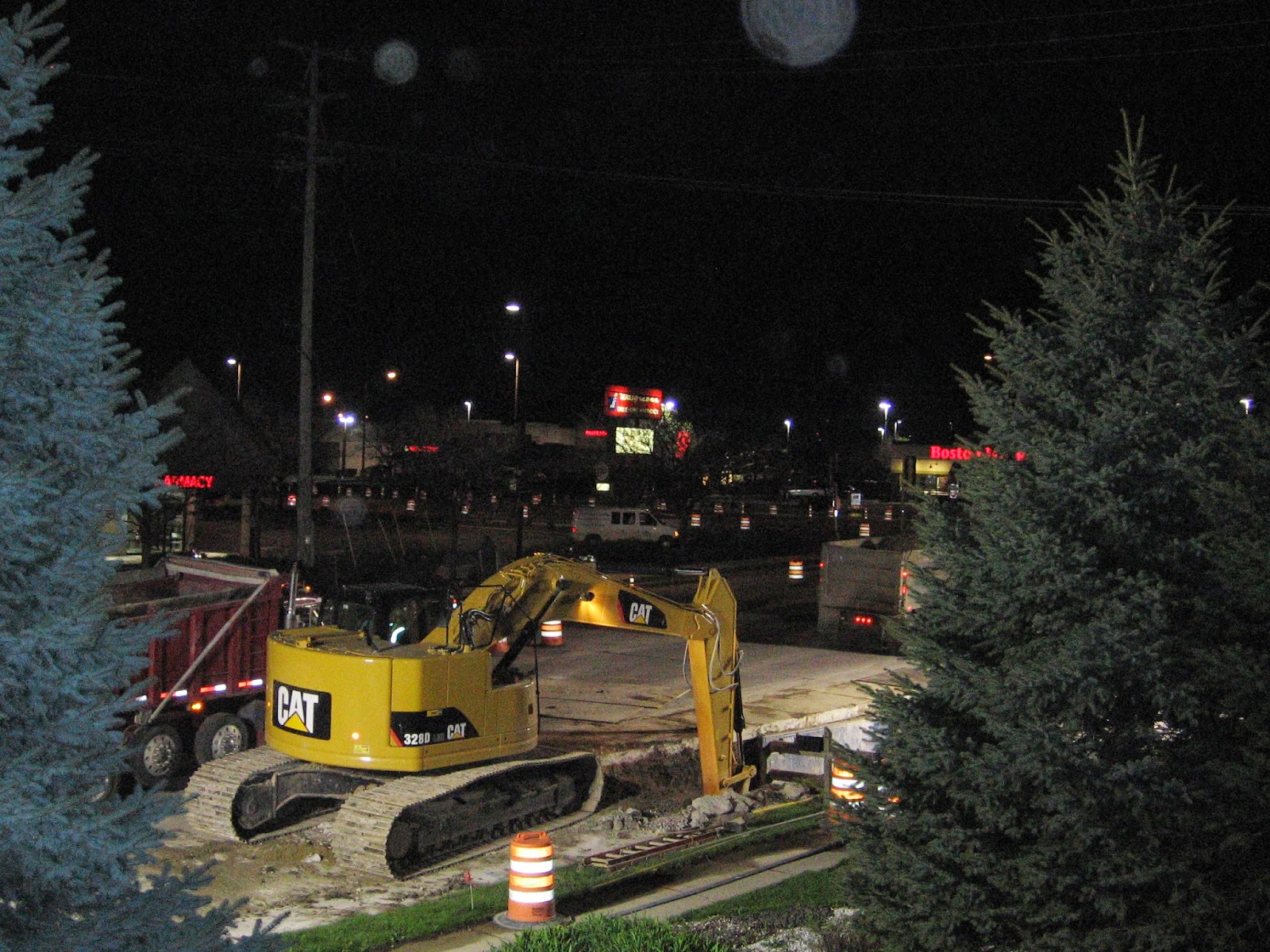 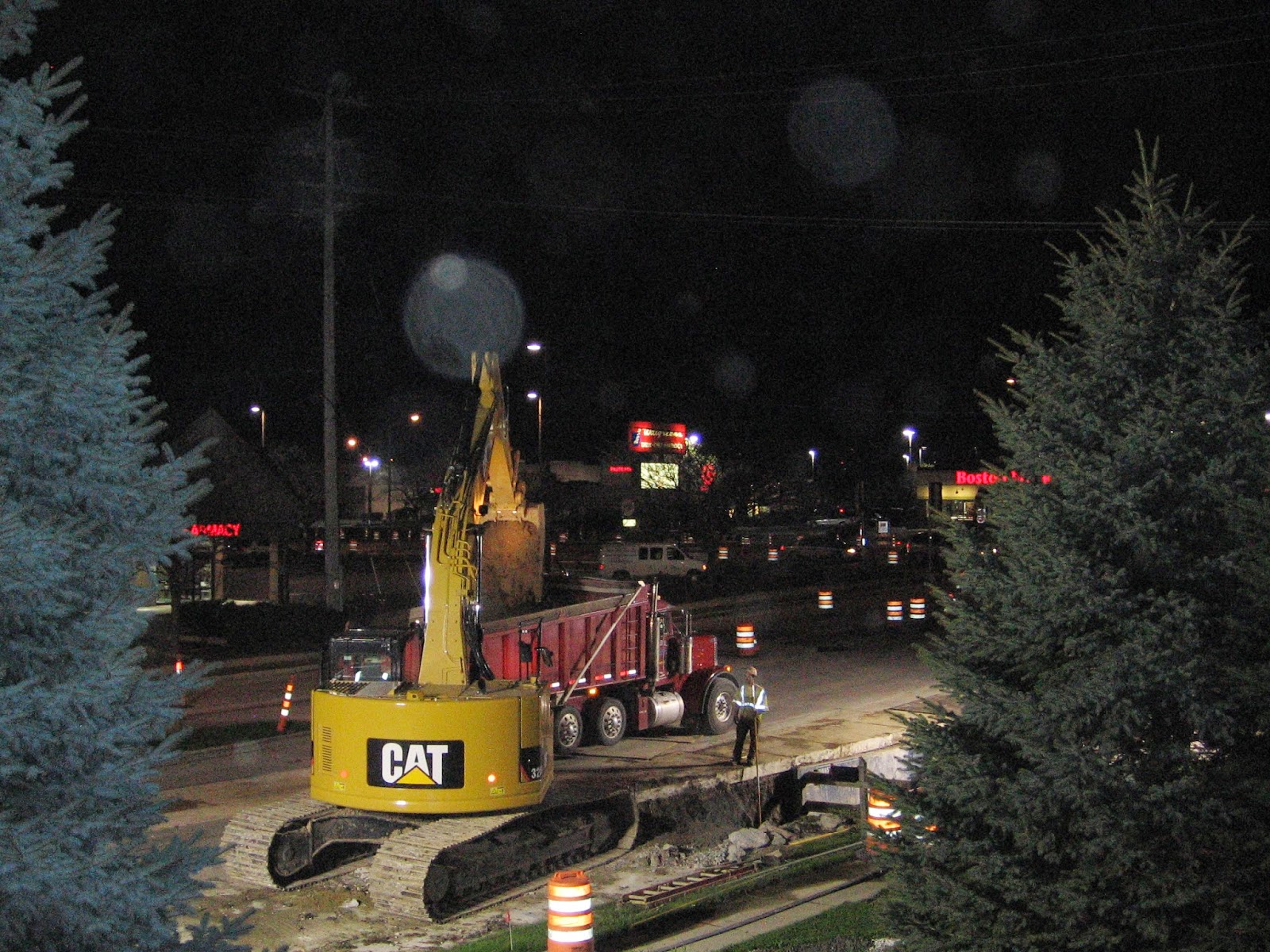 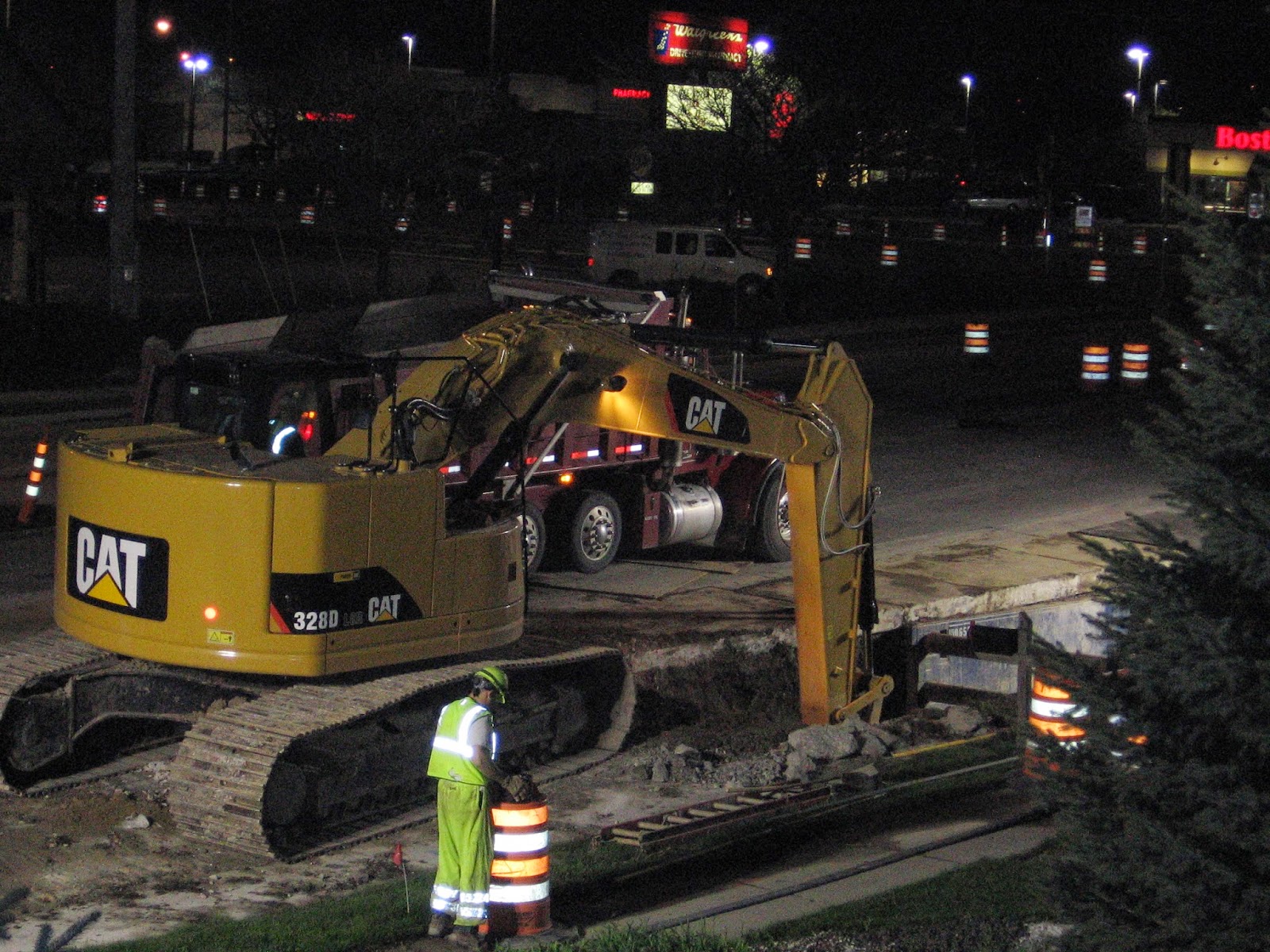 More construction vehicles in the 'No Construction Vehicles' posted area in the two photos below. 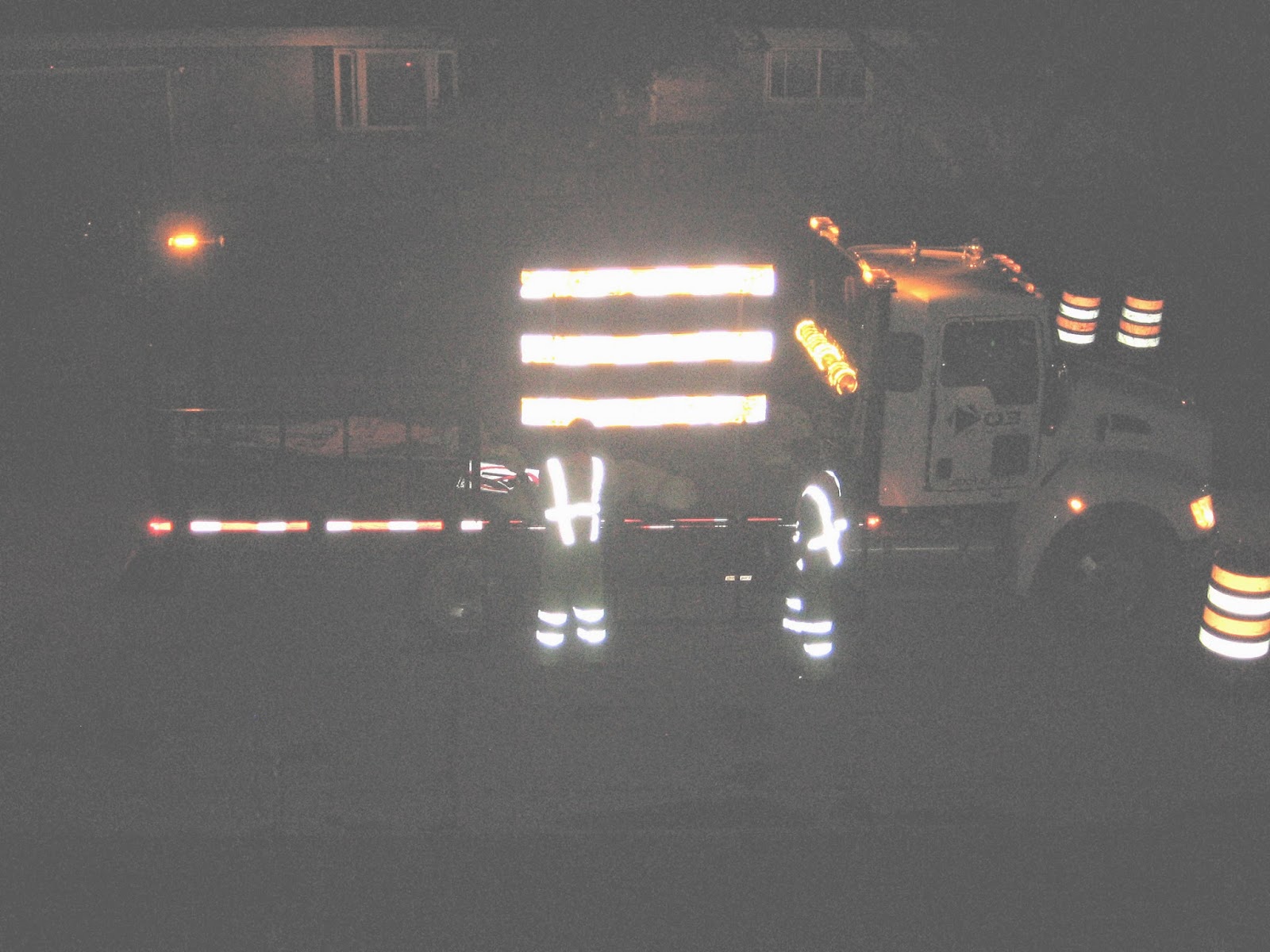 This photo below also shows the ditch transferring from the South to the North side of Cleveland Avenue.  There were buried utilities of one sort or another on the North side of the street in front of our house. 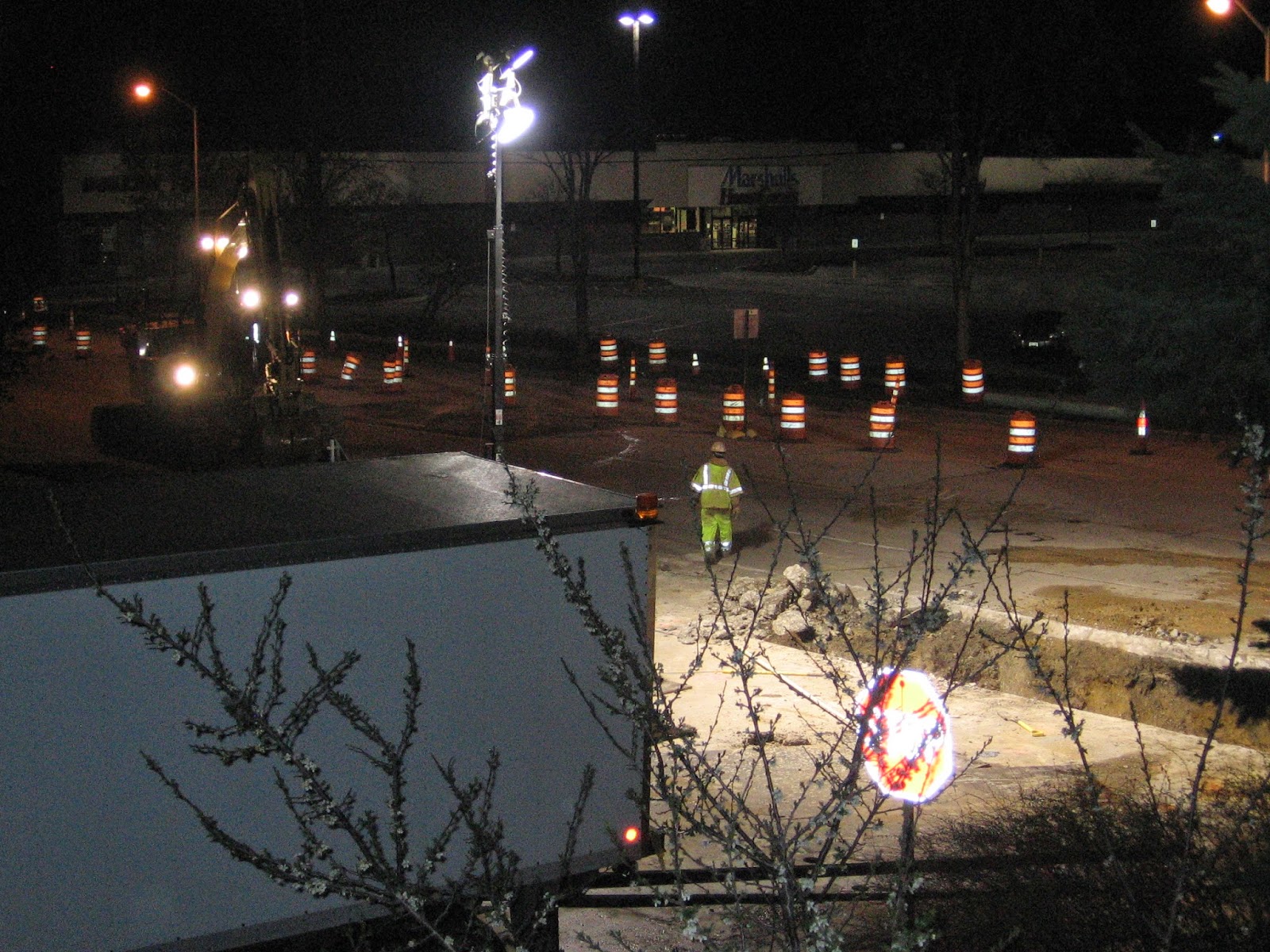 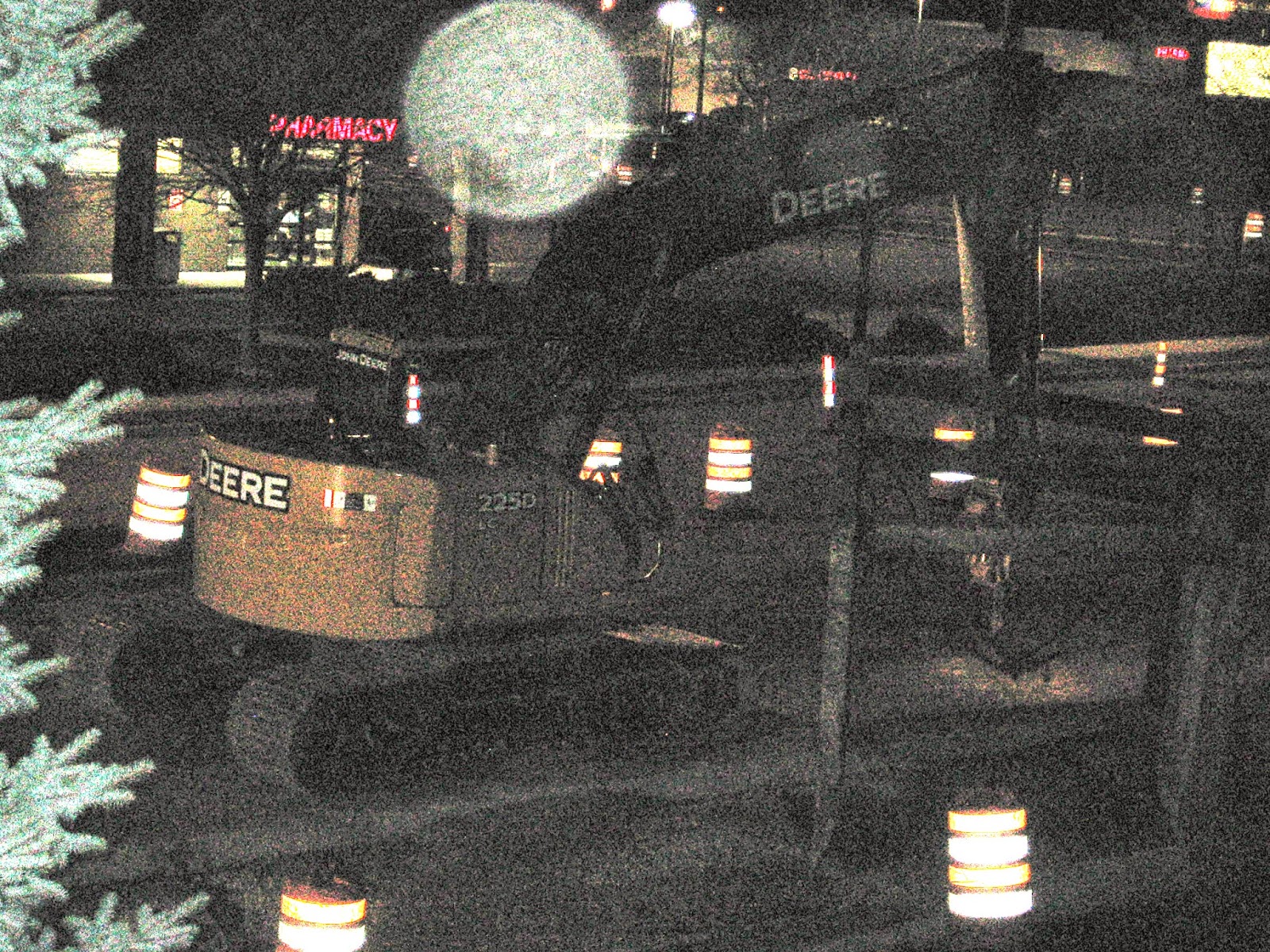 I am angry enough at this point to be nit picky.  A hose was hooked up to the fire hydrant on the easement and dumped onto our lawn next to a pear tree planted last Spring. 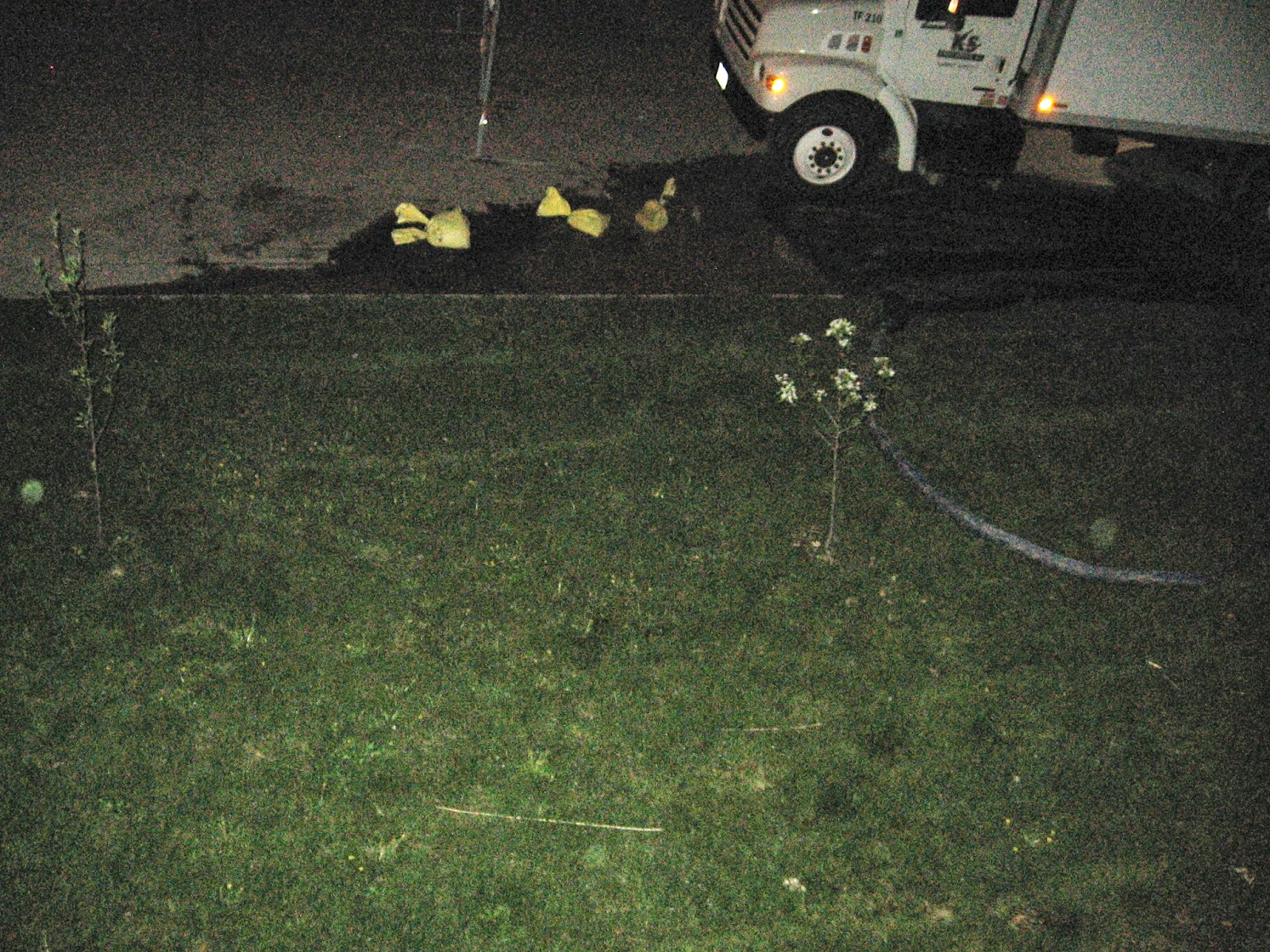 Posted by PiasiniTimes at 4:25 PM No comments: