Summer 2016: Fallow Field to Currant Field - How to Build a Deer Proof Fence

This is the back portion of the lot. There is an old out building with trees growing through it.
On the bottom of the hill is where the currant patch is going to be planted.  At this point it is sweet fern, alfalfa and wild growing things I do not recognize. 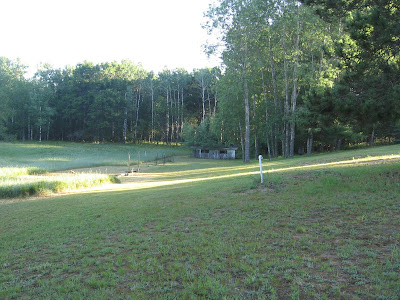 Full moon lit up the yard in early June 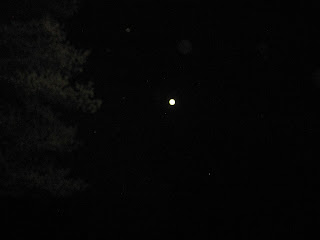 Larry began the task of hand mowing the back field, one section at a time.  It took a while, but he kept at it.  By the end of the Summer he was able to use the riding mower to keep it in line.

The most amazing thing I learned about my handsome distance runner is he has a need for speed.  Do not get in front of him when he is on his riding mower. 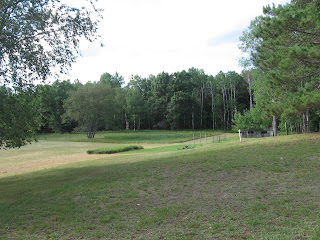 The two does and their fawns took advantage of the shorter grasses in the photo below.  I don't know if they sprouted new leaves, or the deer were just interested in something different. 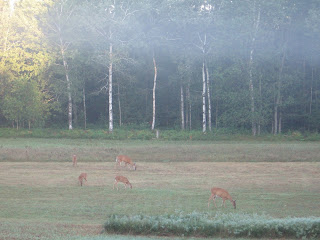 This is the field once Larry had it where he wanted it. 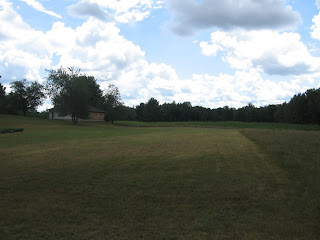 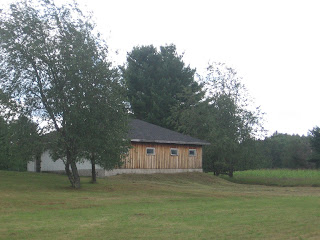 During the week, my handsome distance runner would research how to build a fence to keep out deer.  The following photos are what can be accomplished with research, a fence pounder, a 10' ladder, basic tools and the help of a willing son-in-law to get the high stuff attached.
The photo immediately below is fence posts going into the ground using the pure determination of my handsome distance runner. 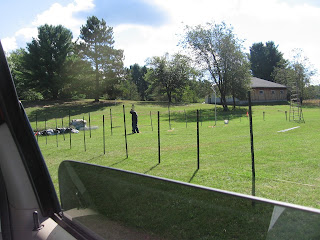 There is a stack of light colored stuff in front of the fence and on the edge of the sweet fern bed that was not cut down.  It is the carpeting we pulled from the house.  My cousin uses it in her garden to keep down the weeds.  We cut a hole in the middle of each ~ 4'X4' piece of carpeting and a slit to the edge.  This will make them easy to put in place and remove.  We will see how this works out next Summer.  Until Spring the stack will stay where it is.

Before we cut the carpeting to size it was stored in the garage.  The mice were too eager to use it to store choke cherry pits.  I'm not going to make it easy for them to over Winter next to my currant plants. 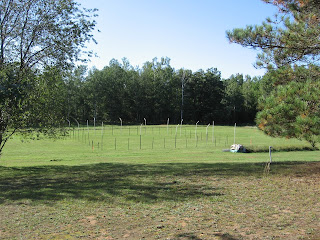 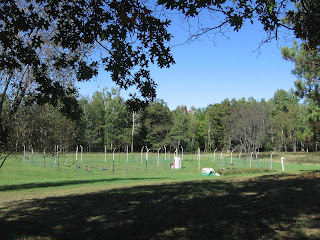 6' high wire fencing was the bottom row.  By this point the storage unit from the patio had been moved to the fenced in patch. 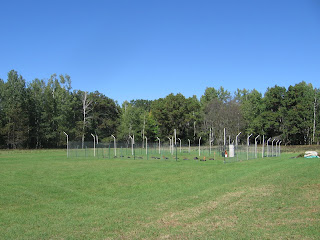 This is where the second row of fencing was put up.  It took my distance runner, son-in-law and myself the day to install. 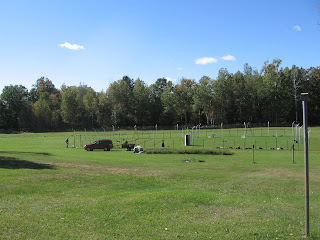 There are two sets of gates.  1 for the lawn mower needed to keep the grasses in line and one centrally located for people to use. 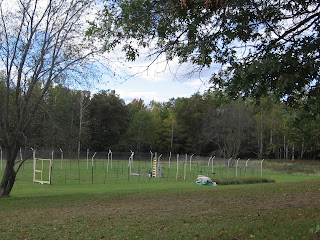 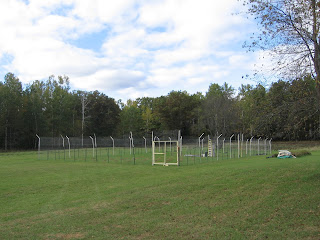 Yes, that is frost on the field. 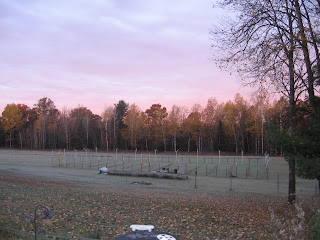 The 22nd of October the currant plants that had been growing in our West Allis yard were re-located to Wausaukee.  The prepared holes were bastard trenched and amended with aged manure provided by my sister's horse.

It took me a month to prepare the 99 planting holes.  It took us 3 hours to plant the nursery stock.

There is an abundance of the variety Red Lake, so alternate rows are Red Lake.  The other rows are started with Consort, Ben Sarek, Pink Champagne, Rovada Red (tastes the most like the currants my grandma grew) and Jonkur Van-Tets.  I took cuttings from these varieties to fill in the rows.

We took a trip to Channing in July to retrieve cuttings from the currant bush in Aunt Mary's yard.  There is a full row cuttings that I have named 'Mary Rassmussen' variety.  Now let's hope they are edible. 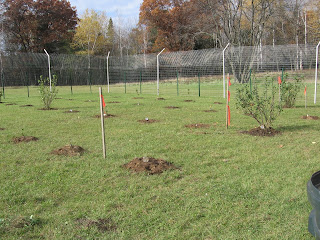 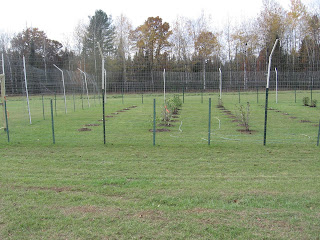 The doe in the photos below took her time one day nudging the bottom of the fencing over the entire perimeter of the patch.  In the two weeks since, my handsome distance runner has shored up the fence and added a couple rows of barbed wire to the bend in the fence pole.

The one concern we have is the bears in the area.  Neighbors on either side of us have seen them walking along the tree line on the other side of the berry patch.  Providing a source of food for the bears is discouraged.  Bears that are used to people are dangerous to have around.  If they become a nuisance, we will have to invest in a second fence and electrify it. We will see how the bears are next summer when the larger currant bushes produce berries. 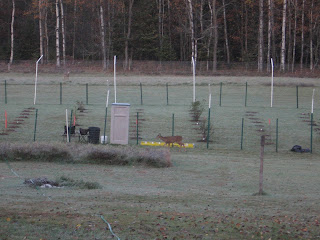 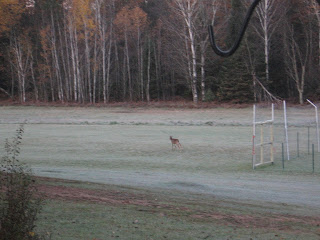 Posted by PiasiniTimes at 7:02 PM No comments:

The house came with mice.  They do not bother the flour in the paper sack, but Phil put his fruit loop cereal in the fridge.

My handsome distance runner researched on line how to rid the house these pests.

There are spring traps:  The mice ate the bait off them and the springs do not snap.

There is mouse poison.  They ate the block, leaving dust where the block had been.  I've found no dead mice.

There is the sonic noise maker that is plugged into the wall.  The mice have been storing their acorn collection next to the outlet they are plugged into.

There are cotton balls infused with oil of peppermint.  The basement smelled like a peppermint patty.  Nummmmm.  The smell wore off and the mice stole the cotton balls.

There are sticky pads.  These have been catching mice.  6 last week.  The mice are smart.  They are flipping dirt onto the sticky pads so they are no longer sticky.

Now that the weather is cooling off the mice have begun to store their acorns in the house.  Most are in the basement.  This last weekend my handsome distance runner found an acorn in his weekend duffel bag when he pulled out his underware.  Another acorn dropped to the floor when I folded an afghan.  The sticky traps have been brought to the main floor until we find the entrance these vermin have been using.

Last weekend a barrier method of the vermin repellant 'Great Stuff' was implemented from the outside of the house.  This weekend the mouse count was down to one, with NO additional activity noted.  No new acorn stashes.

Older sticky pads were removed and new ones put in place.  3 crickets were captured overnight.

I began removing the paneling and insulation from the basement walls.  The mice have been using the sill of the poured basement walls designed to support the steel beams of the prefab as their well insulated home.  Acorn shell, fur, pebbles and a red lego.    The rest of the basement will be stripped down to the original cement and everything left by the mice will be removed, bleached and HEPA cleaners will be set up.

Before putting new fiber glass insulation back on the sill, all seams will be covered with more Great Stuff.

Outside, all landscaping will be removed from right next to the house before the first snow.

I swept out the cellar entrance, removed all the leaves and sand.  The basement and cellar entrance were and searched for mouse entrances and any holes in the rim joist and foundation were filled with vermin repelling great stuff and steel wool.  I vacuumed the spider webs from the ceiling.

We discovered the damage the mice have done since the house was built.

The original basement had been finished with 1970's wood paneling.  There was polystyrene sheeting between the paneling and the poured basement wall.  All was removed and any area that looked like a mouse outhouse was sprayed repeatedly with bleach.


The rim joists were insulated with 6" thick, R19 fiber glass.  What I removed from the rim joists was infused with pebbles, acorn shells, dead and living Japanese beatles, fur, tons of excrement and a little mildew.  Nasty, nasty stuff. Maybe an R5 at best.

The hose on the new shop vac is too short to reach the rim joists.  The canister has to be balanced on a cooler to reach.  All the plumbing runs on the West side of the basement ceiling, just a few inches from the rim joists.  Not easy to get into the loose debris on the rim joist sill. Half of that wall is done

The only place left for the mice to hide is under the basement steps.  I set up a sticky trap, pushed a few poison blocks through the crack in the rise, and there is now one less mouse in the basement. The Japanese beatle population has been significantly reduced with the help of a broom and a shop vac.

When all is finally cleaned up, the rim joists will be re-insulated with pink board (R10) surrounded by a bead of great stuff to provide a vapor barrier.  But not this week.

Posted by PiasiniTimes at 7:02 PM No comments:

How we spent our Summer

Hi to my readers of less than half a dozen.

We purchased a house with land in May to grow the currant business.  The house is already set up for aging with everything on one level and grab bars where they need to be.  The price was within out budget.  The mechanicals solid.  Some worn.  Some new.  All good things.

What we did this Summer: 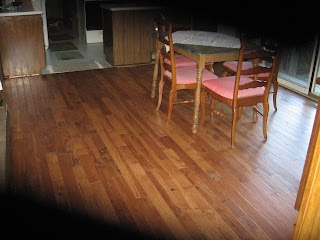 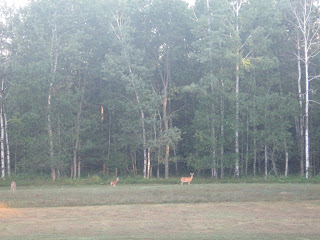 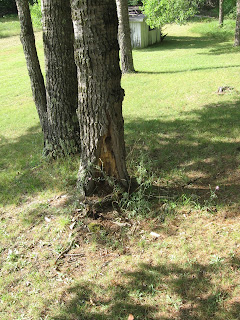 
Posted by PiasiniTimes at 6:12 PM No comments:

It has happened.  I am now recognized as the favorite aunt.  No doubt it is said to all the aunts out of my earshot.  The photos below will demonstrate how intentional I have been to grab the title of 'FAVORITE AUNT'.

But, I digress.  To earn the title of 'favorite aunt' a tradition has been established, that I am surprised to discover a much anticipated tradition by at least one recipient.  Gifts of warmth are now provided in a progression.

High school graduation comes with a quill-o of fleece on one side and something wind resistant on the other in the high school colors.  It will tolerate anything a dorm can throw at it and will stuff into a pillow to transport in a trunk during the winter for break down safety.


The first post High School degree earns a blanket patched from deconstructed sweatshirts on one side and fleece on the other.  It is in tech school or college colors and I am diligent making sure at least one of the sweatshirts used has the school logo.  That is not always possible, so occasionally I do have to fully use the zig-zag stitch on my sewing machine to patch and embroider the school logo.  This is the warmest blanket, and justly so because it is the one that will get a person through the salad days of their adult life when a sturdy and warm blanket is like hug when one is needed. 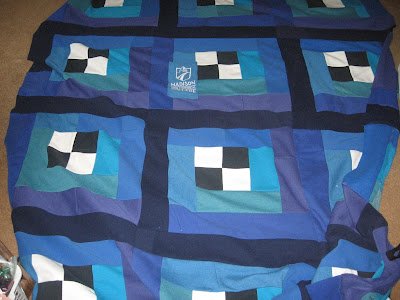 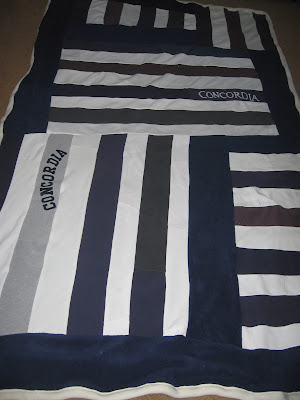 The first wedding is a traditional patch work tied blanket. 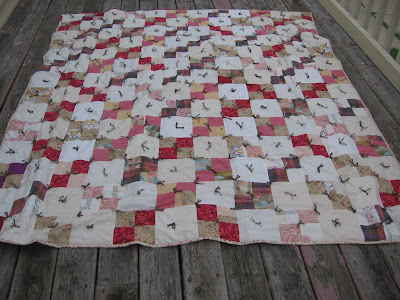 The first baby is a blanket of whimsy.  It is a small blanket well constructed for use and a washer and dryer, but with love and creativity that babies bring out. 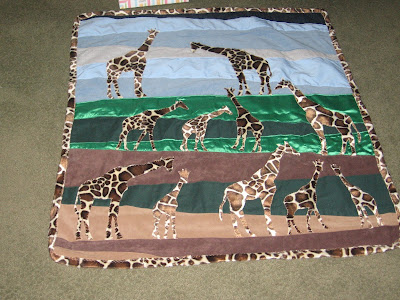 Posted by PiasiniTimes at 7:05 PM No comments: