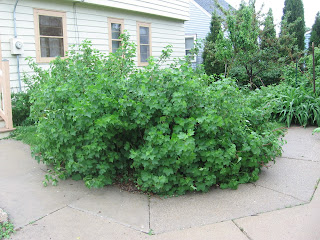 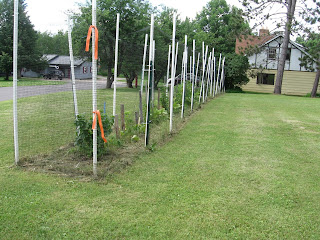 Growing my berry business has been interesting.  2015 has been a learning experience from directions not anticipated.  Let's start in the beginning.

I planted a raspberry patch with red and black raspberries and pink and red currants when we bought our home in 1987.  It was for household use.  The top photo started as 3 currant plants that I ignored and neglected.  Last month I finally pruned out the old and diseased stems.  The patch now looks like a toddler who's older sibling gave him a haircut.  Like hair, it will grow back.

We bought a weekend house in Crystal Falls Michigan in late 2011.  The next spring I planted a variety of ribes (gooseberries and currants) in the yard.  More plants were ordered and shipped to Upper Michigan from Jung's Nursery in 2013.  The photo of the neat row of plants above was taken the Summer of 2014.  It is fenced in because in Crystal Falls the deer will try anything.

The original object was to see if they would grow in the U.P.  The plants are a little shorter than the ones in SE Wisconsin, but with the exception of Hikomani (sp) they did well. Both Hikomani gooseberry plants died.

In 2013 I discovered there were still raspberries and currants in my freezer from 2010.  Our use did not match production.  I went looking for a CSA to join.  Instead Lisa, who sells organic meat at the West Allis Farmers' Market offered to sublet space in her booth to me on an as needed basis.  My berry business slowly started off.

This was the third year of selling pink and red currants and black and red raspberries from my West Allis yard.  This is also first year I had pink, red and black currants to sell from the Crystal Falls yard. PLUS, my sister volunteered the harvest of red currants from her yard.  AND... it was a full production year from the Italian plum tree.  I finally made money at the farmers' market.  Instead of one Saturday, my fruit was present for 3 Saturdays.

South East Wisconsin has a sizable population of immigrants from Eastern Europe.  Currants and gooseberries are available in Eastern Europe like blueberries are here.  The question asked often was availability of black currants.  This was the first year I could say yes as they were ripening in the Crystal Falls yard.  Two weeks later I had black currants, red currants and raspberries for sale.  A woman walked up to the display of black currants, made an offer I could not refuse and happily went home with my remaining black currant stock.  Lesson learned.

I will stop here with a side note about the taste of currants.  There is a tartness to red currants.  The pink currants are a bit sweeter.  Both can be eaten fresh.  Black currants have a muskiness to them that is a definite acquired taste. 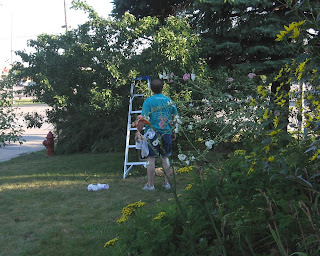 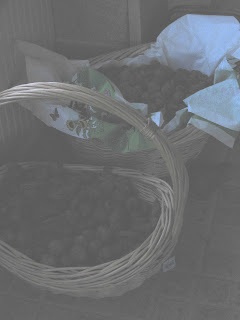 The third week I sold at the Farmers' Market was because the plum tree was remarkably fruitful.  I froze and gave away ~ 2 bushels of Italian plums.  Then I took the remaining 4 bushels to sell at the farmers market along with a plum kuchen baked from an on line recipe to sample.  An hour later I packed up my table and went home.  Plums sold and kuchen devoured.

South East Wisconsin must be the northern edge of plum growing.  The fruit needs a warm spell of 3 - 4 days to pollinate and set fruit.  This year there was both.  Larry and I successfully spent the summer thinning out the fruit to keep the mildew away and the branches from splitting.

Before the currants ripened I began looking for a small acreage in Michigan's Upper Peninsula to expand my currant growing kingdom.  In 2017 I will acquire my 4th week of paid vacation from my job.  I thought, it was possible to have the beginnings of a berry farm coming into full production at the same time that 4th week kicked in.  Then I could do farmers markets in West Allis and Iron Mountain and maybe some U-Pick-It.

This was a new experience.  Farming was never on my to-do list.  Information and resources were needed.  I contacted the Michigan state representatives requesting guidance on setting up a berry farm.  That was such a good idea!!!  I was put in touch with the Michigan department of Agriculture.  Via email and phone calls I met  Michael Bryan. He is to date the most knowledgeable person I know concerning ribes.  I've provided his contact information below.

He also gave me news I had not anticipated.  Currants are not welcome in Michigan.  White Pine Blister Rust is a disease that spends part of its life in currants before going on to infect White Pines.  The US government tried to eradicate the plants in the beginning of the 20th century.  In the 1960s they gave up and it is left up to the state to regulate the growing of currants.  Lest you think I am being irresponsible, the majority of White Pine Blister Rust is being transfered by the indigenous wild currants.  The red currant Rondom and the black currant varieties I was growing were going to require a permit in Michigan.  The rest of the red and pink currant varieties were not allowed to be grown or transported in Michigan.  In the conversation I asked him if the world would end if the berries were not moved until spring.  The currants were allowed a verbal reprieve.

The state of Wisconsin does not regulate currants.

When the plants went dormant in October, Larry and I dug them up and moved them to West Allis.  All the plants fit in two mailing envelopes ~ 12" wide X 48" tall when originally planted.  The 18 plants we brought back from Crystal Falls filled the back of the 4 X 6 trailer.  It seems a miracle what can happen in 3 - 4 growing seasons.  It will be a miracle if the plants don't die of shock when they break dormancy in the spring.  The UP soil is very sandy.  The soil in SE Wisconsin is dark clay.

Crystal Falls Michigan is ~ 10 miles from the Wisconsin / Michigan border.  No biggie.  So we went looking for land in Florence County Wisconsin.  We found lake property, hugh hunting camps, small hunting camps, commercial property.  Nothing within our budget.  Nothing that did not need to be logged before we could use it.

Larry suggested we sell the house in Crystal Falls, Michigan and buy another house in Wisconsin that has a little acreage.  We now have an accepted offer on a house in northern Wisconsin. It is also an hour closer to our home in West Allis.

The house in Crystal Falls has been on the market since late September.  No buyers, yet.  The timing may be off when the house is finally sold, so we've rented storage units near the house we offered to buy.  It is easier to move the household goods to a storage unit on the main highway for the winter.  The house we would like to buy is a cottage tucked away in the middle of 4 acres along a romantic snow covered gravel driveway.  I think snowbound may probably more descriptive later this winter.  The thing about Winter is, it goes away on its own in April or May...   It is also necessary to grow ribes.  Those in the South cannot grow currants because it does not get cold enough in the winter.

Meanwhile the 18 ribes have been transplanted to the yard in West Allis.   Add to that the 40 + currants I am trying to propagate with stem cuttings and the 6 currant bushes thinned out of the original patch...... I am toying with the idea of having the 60 X 110' yard rezoned as agricultural.

There are those stories that filter through families that surface from time to time.  When our lives are mentioned going forward, it will come with the story of how we sold a house to buy a berry farm.

Posted by PiasiniTimes at 5:07 AM